End of the Alphabet 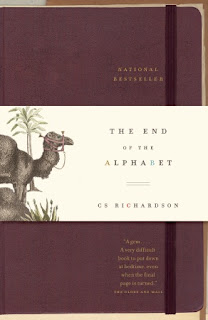 I picked up this book first because I've heard so much about it, and second because the design is so great. It is a small book, which looks like the travel journal that one of the main characters purchases early on in the story. It is beautiful. My husband read it first, a couple of years ago (how time flies!) and gave it a thoughtful, personal review that sparked my interest...even though it took me nearly 3 years to the day to pick it up myself.

The book tells us the story of Ambrose Zephyr and his wife Zappora (Zipper) Ashkenazi. Ambrose has just been diagnosed with a mysterious disease; he has 'maybe a month' left to live.

Ambrose and Zappora have a perfect marriage -- the depictions of their habits and their relationship is realistic yet very moving. Once they receive this diagnosis, they decide to go on a whirlwind world tour, visiting places from A-Z. (Chartres and the Eiffel Tower, for example) They make it to G before realizing that they must go home to London; travelling is no longer in the cards.

This is a quiet narrative, but the ending, though made clear from the first page, was devastating. I finished this book late one night in bed, and found myself bawling over it. It's intensely moving and constructed like a miniature painting: every detail has significance and the actual story told to us is just a microcosm, hinting at a larger, complex life of each character and of their marriage. I found this book rather extraordinary and while it would benefit from a slower, second reading, I don't think I can take the emotional wallop of a second reading right away! Maybe in a year or two...

Really, this is one book that lived up to the recommendations I'd heard beforehand. While it is short, it feels expansive and holds the power of a much longer narrative -- every scene unfolds in the reader's mind to fill in a much larger time span that is indicated by the brevity of the writing. Highly recommended. But bring kleenex.

CS Richardson is an accomplished book designer who has worked in publishing for over twenty years. He is a multiple recipient of the Alcuin Award (Canada’s highest honour for excellence in book design) and a frequent lecturer on various facets of publishing, design and communications. His design work has been exhibited at both the Frankfurt and Leipzig Book Fairs. He is currently at work on his second novel.
(biography from CS Richardson's agency, the Cooke Agency)