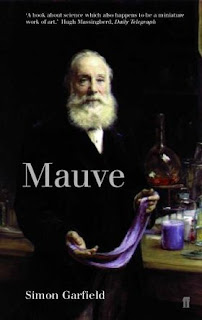 I've had this book for quite a while, having picked it up because of the topic -- it tells the story of William Perkin and his discovery in 1856 of the first successful aniline dye (made from coal tar derivatives) -- the colour 'mauve'. He made this discovery accidentally; what he was really trying to do was to create a synthetic form of quinine to treat the malaria that was still rampant across the British Empire. His willingness to experiment with the actual results lead to mauve.

I thought the science of this discovery would be interesting, plus a large part of his success was due to the fashion world taking up this colour, which sounded like it could be fun. I was correct, and was pleased to find that this was an easy, entertaining, and thorough book. It focuses on William Perkin, but goes beyond simply his life, his discoveries and his business to show how the new colours (and the new industry) shaped fashion, economies, and even wartime innovations, including explosives.

The writing is very clear and comprehensible, making the life of this young chemist fascinating and the world of academic vs. commercial chemistry actually quite intriguing. Garfield covers the specific science of the dyes, but also the relevance to society as a whole, in so many areas. He also shows how it was both Perkin's actual discovery and his willingness to risk a scientific career on making a commercial success of his colour that changed the way chemistry was perceived, making it a more obvious choice for students who wanted to make money at their work. (Perkin was 18 when he discovered mauve, and his father staked everything to create a factory in which William, his brother Thomas and their father all worked -- and they made a LOT of money.)

Garfield even talks about the environmental effects of this surge in dye-making. He records that the stream outside Perkin's factory would change colour every week, and that a factory in France was convicted of poisoning villagers downstream with arsenic. He follows the industry from the moment that mauve became a fashionable mania (shortly followed by another chemical dye from France called magenta) to our present day experience of taking multiple colours for granted. Influences such as war (the desire to dye uniforms surprised me), or fashion, or hard chemistry all have a place in this story, and keep it from being too narrow or dull.

I really enjoyed this book, and would recommend it to anyone curious about how such aniline dyes came about, or how our need to colour our world in a multitude of hues has shaped so many areas of our societies. There is one section, in which Garfield is sharing a list of registered colours via the National Bureau of Standards, Washington DC, that sounds like poetry. A gorgeous and evocative list of names and sources of colour!

Extremely well-written, not obfuscating the story with overly scientific explanations and yet not minimizing the importance of the science, this is a great general read. Lots of great "dinner party tidbits" in this one -- I always love a science book that makes you sound smart in general conversation ;) I know that I am looking at all the colours in my environment a little differently now.
Posted by Melwyk at 9/21/2010 09:26:00 am