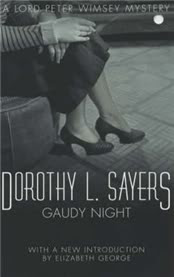 What great fun I had on my recent holiday reading this detective novel! I've been meaning to read it for ages, but just got my hands on a copy in time to take it with me on my mini-break last week. Now I must go back and read all the Peter Wimsey books in order, as I think I've fallen a little bit in love with him!

I've done things backward, starting with the book at the end of the series - but many people have told me it is the best so I wanted to start with it. Also, Lord Peter and Harriet's romance is a strong part of this book and is so very well done (for those of you who've read it, the river scene? Fanning myself...)

Starting out with quotations, Latin, Oxford settings, sonnet writing and so much philosophical discussion, this novel gripped me almost immediately. I love the depth of the characters, and I love the fascinating discussions the group of female Oxford scholars get into with Harriet. It makes me nostalgic for an Oxford I never knew (and never could have) -- quite an authorial accomplishment, I think.

I do have to admit that there are large swathes of the novel that I didn't understand. There are many literary allusions that I missed, but when I did catch one I felt so proud of myself ;) And I did really feel the lack of a Latin dictionary -- I am sure a grasp of Latin would have added to the experience, especially the ending. There are also elements of the social structure that I didn't quite get, for example, in discussion of a certain woman, Harriet and the Dons look at each other significantly and say something like "You know the way that is" and "Exactly". But I didn't know how it was, and I knew I was missing some fine point of social expectations and meaning regarding women's characters in 1930's England. Nonetheless I enjoyed this novel immensely. I often enjoy reading something I don't quite understand fully, a habit I picked up in childhood. And this novel did make me feel woefully uneducated at times, but never excluded from the story and its many rewards.

In this novel there is no actual crime to investigate; but there is implied threat followed by real violence - Harriet and Peter are trying to pinpoint the potential for crime before it moves beyond nuisance to something very serious. When Harriet is called to Oxford, it is because there has been a string of obscene grafitti and messages and various unpleasant incidents seeming to be aimed at the educated women in Harriet's alma mater, Shrewsbury College. Since any noise about a scandal in the college would damage the still precarious state of women's education there is great need for discretion; thus Harriet's involvement, and by extension Peter's, rather than the police being called in.

The setting and the motive for the nasty incidents all combine to give us insight into Harriet's mind and the reasons for her resistance and eventual capitulation to her love for Peter. It is extremely well written, challenging to read and yet easy to follow even when skimming the more abstruse elements.

Rewarding and entertaining reading, certainly. And a couple of favourite quotes:


However loudly we may assert our own unworthiness, few of us are really offended by hearing the assertion contradicted by a disinterested party.


"The trouble is," said the Librarian, "that everybody sneers at restrictions and demands freedom, till something annoying happens; then they demand angrily what has become of the discipline."

Nymeth at Things Mean a Lot says "Before I can even begin to try to be coherent, I need to get this out of the way: the! river! scene! AHFHGF!!@ "