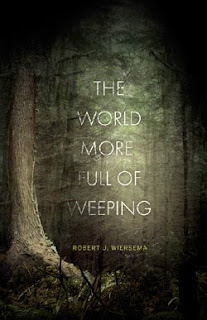 I read this little book as part of the Once Upon a Time Challenge (for which time is rapidly running out!) It takes a line from Yeats' poem The Stolen Child as its title, and it is indeed a tale of a stolen child. The cover is shiveringly appealing and I picked it up in hopes of a magical read.

Set in small town British Columbia, the story centres around a fractured family. Brian lives with his mechanic father, but is set to move into the city to live with his mother and her new boyfriend. He does not want to do this; he loves exploring the woods around their home and doesn't want to leave. He is especially loathe to leave now that he has a new friend: Carly, who meets him in the woods and despite being dressed in a slightly old-fashioned way she is knowledgeable about the woods and is able to show him places he'd never known about.

The story begins as Brian heads off into the woods for the day, his father works on a car in the garage, and his mother is expected to pick him up later in the day. She arrives, and Brian does not come home. At that point a search and rescue effort begins -- and we find out what has happened and why, finally, at the end.

The brevity of this tale (really a short story) precludes any extensive character development, and I really did feel the lack of it. The mother is a cipher, who lays on Brian's bed and cries for most of the story. And the end comes abruptly and left me feeling that there needed to be more of a resolution. Even Brian and his father needed more colour, at least for me.

Overall, it was an interesting concept, with a setting that facilitates the believability factor of someone getting lost in the woods. But, I think it is a problem I had with the length and manner of writing -- I just did not get sucked into the story, I didn't feel the sense of enchantment I'd hoped for.

I really enjoyed an essay appended on to the end, regarding Places & Names, however. It was a fascinating look at how places in fiction are both real and not real, and how an author creates the dual sense of place. Wiersema is fascinating when he talks about the town in his life that inspired the fictional town this story is set in, and the way its ghostly presence comes out in fiction.

Still, I think that others who aren't as distracted as I've been lately may have more success letting the story absorb them. Read a few other opinions before making any judgement based on my inability to love this little book. A few other bloggers have mentioned that this would be a good choice for teens, although it is aimed at an adult audience -- I'd agree, and teens who like supernatural elements might find this an easy but gripping read.

Gavin at Page 247 calls it "a mysterious gem"

Email ThisBlogThis!Share to TwitterShare to FacebookShare to Pinterest
Labels: book review, Once Upon a Time Challenge