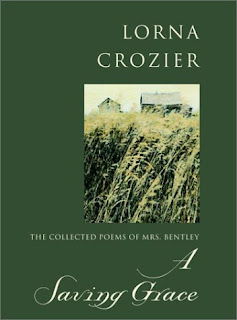 I mentioned this collection earlier this week: having just reread Sinclair Ross' As for me and my house, I wanted to also reread this set of poems which were inspired by the novel. Thankfully, Lorna Crozier wrote the poetry, which automatically meant I loved them much more than I did the novel! ;)

It is a brief book, with the poems speaking to and expanding on the story of Mrs. Bentley, the nameless journal keeper and narrator of the novel. She is a character who gets under your skin a bit, making you wrestle with you she really is. Unreliable narrators will do that to you. Here Crozier takes on some of the things that Mrs. Bentley leaves out of her version of the story.

While I very much enjoy Crozier's poetic voice, and her images are often unexpectedly sharp and exact and wonderful, I am not sure you would be able to fully benefit from this set of poems if you were unfamiliar with the inspiration behind them. Some of them stand alone quite perfectly, while others seem to need the background knowledge to shade them in a bit.

A few of the poems speculate that Mrs. Bentley was not so innocent as she claimed in her journal. I didn't really care for those, but that is perhaps because I had just finished the novel and was, truthfully, a bit tired of Mrs. Bentley and her circuitous manner of storytelling. Are Crozier's poetic speculations supported by the original text? Not altogether. But honestly it doesn't matter to me; I didn't like the original text all that much, and prefer Lorna Crozier's poetry over most other writing anyhow!

This collection has just been thoroughly examined by Person of Consequence over at Experimental Progress. And that discussion brings up many points I loved - ie: at one point it 'seems to dip slightly into fan fiction'. For an interesting look at this collection from the viewpoint of an English PhD student, take a look at that post.