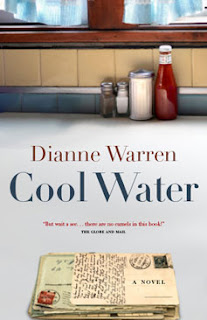 This is a book I heard about just before its release, via a great review at My Tragic Right Hip. I have to agree with her -- this is a fantastic novel, one of my favourites of the year so far. I don't know why I am surprised by that; it is set in Saskatchewan (my home province, which I have a soft spot for) AND it is a Phyllis Bruce book. I idolize Phyllis Bruce, and rarely go wrong with her selections. And there is something about that gorgeous cover that makes me want a full size poster of that image.

This novel appears simple at first glance. It is set in Juliet, a small town in south Saskatchewan, where life moves along quite predictably, the regular and small moments of everyday life gathering into bigger moments and into resolution of one kind or another. Like the last Canadian book I read, Sounding Line, this tells the stories of a collection of disparate lives which all intertwine. Each of the characters cross paths throughout the book, and their stories are seen to influence and be absorbed into the others'. It is a masterful study of how we are each the centre of our own story and yet none of us exists in a vacuum: while we may think we are independent creatures we also play a role in other lives, some effects of our existence remaining unknown to us.

The book opens with a horse race between two cowboys, sometime in the early years of the 20th century. It is a hundred mile, day long race which is won by the younger of the two, much to the disappointment of most of the spectators. While these characters do not show up again (except in stories told by old farmers) they represent the theme carried on throughout the book. As Henry, the defeated cowboy, beds down that night, he re-examines his life. He looks ahead with a new perspective and realizes that this defeat may mean he can change his future by leaving off being a cowboy and settling down somewhere on his own land. As he thinks of this idea, things alter:

As his departure became a certainty, his heart slowed and his body lightened, and the straw beneath him became soft as a feather bed. In the hot barn, tomorrow was cool and clear, like water on his tongue.

The characters in the book are all on the cusp of change and have to negotiate an unsettling situation of one kind or another in order to find a new place for themselves, a new direction. They have to let go of the past in order to move into the future. Nevertheless, the characters are not types or symbols: you can feel for them, sympathize with and sometimes shake your head at them as well. There are a few distinct story lines, and which one will resonate most will likely differ for everyone. I really enjoyed Lee's story; he is a young man whose adopted parents have both died and left him in possession of the farm he grew up on. He is alone in the old farmhouse, feeling echoes of both parents, not certain of who he is or where he really belongs. A grey horse appears in his front yard in the middle of the night, distracting him from his insomnia (and it is a little odd that everyone in Juliet is suffering from insomnia that night!) and so Lee sets off on what turns out to be a marathon horse ride which echoes the opening horse race story.

I imagine this element spoke to me particularly, as I once had a white horse appear on my front lawn myself -- I was a very young child so the memories are vague, but my sister and I saw the horse - which had escaped from the farm annex of the nearby penitentiary - and also saw the truck with horse trailer which pulled up and took it away again. Lee's story brought back that magical feeling of surprise when we thought we'd just got a pony. ;)

There were many other characters who I loved reading about, including the bank manager Norval Birch. His awful job, his pregnant teen daughter and a wife who is more than she appears to be, make his tale a bittersweet and very moving one. There is also a romance developing between Drive-In owner Willard and his widowed sister-in-law Marian, one that neither of them quite knows what to do about. I adored these two. Each story is an integral part of the whole, and even when I didn't actually like a specific character (like any of the members of the Dolson family) they were a part of this town.

It was a wonderful read, with a deliberate pace and excessively normal people. There was humour and pathos, and some beautiful descriptive details worked in. I'd love to know how she made inanimate objects so important and alive in this tale. Highly recommended, this is one I want to own so I can reread at will.
Posted by Melwyk at 4/15/2010 07:54:00 am