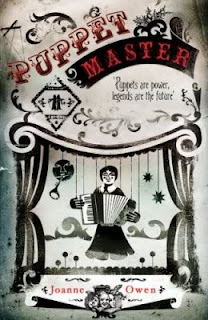 Wow, here's one creepy little children's book I didn't even know about until it appeared on my desk -- just in time for the R.I.P. IV Challenge! It's a story set in Czechoslovakia, written by a Welsh author, taking place in a fairy tale-like atmosphere, and I mean the Grimm kind. It is set in Prague, in a cold and snowy January, 1898, with lots of timeless myth and mystery surrounding the story.

Milena lives in Prague with her grandmother. Her father, a famous puppeteer with a marionette theatre called The House of Dream Delights, has died in a stage accident. Her mother disappeared soon after. Milena has her grandmother and her two magical aunts, Tereza and Katerina, to care for her, and a true friend, Lukas, to accompany her on her adventures. She is convinced her mother Ludmila is still alive, and is waiting for her return. Legends of the mythical founding of the country by three princesses are interwoven into the story, told to Milena by her grandmother, and set apart in the text by grey illustrations along the pages. There are also 'letters' looking as if they are in handwriting, sketches of botanical images, theatre tickets and so on, enhancing the dark and magical atmosphere of the story.

At the opening of the story, Milena and Lukas meet a Svengali-like puppet master who is about to put on his travelling show, using marionettes who are startlingly lifelike. He is huge and scary and yet charismatic, and is bent on convincing the entire town to attend his festivities, the better to gain control over their minds. He is bad enough on his own: but just wait until you make the acquaintance of his twin apprentices, Zdenko and Zdenka. Now they gave me shivers. A dark and whispery pair, they seem to move effortlessly, appearing and reappearing where they are not quite expected. They have a strong prediliction for dead things, dried up things, dark things. Their malice toward Milena seems stronger and more visceral than even the Puppet Master's. Milena discovers through all of her family's storytelling that she is descended from Libuse, the princess who founded Prague, and it is up to her to save the city.

She and Lukas attend the Puppet Master's show, and try to go backstage to examine the marionettes a little more closely, as they seem to have a strange habit of moving when no-one is holding the strings. Along with the head marionette maker Karel, a young man with partial amnesia, they enter into a plot to rout the Puppet Master and free his hypnotized captives. It all follows along mythic lines, with suitably gothic weather, characters, and plot. It is a sharply told tale, with murder and violence and feminist themes right out there in the open. The language is that of a fairy tale, with characters who are Evil or Good, but also a few that could be either. The finale is not exactly final, but allows for a creeping shiver as you realize that perhaps all the Evil is not at an end after all...

The production of this book is something special as well; the illustrative matter is given a copyright credit, suitably, since it is a vital element. The idea of marionettes, of control or the question of 'who is pulling the strings', is used very fittingly. It comes out of a tradition of puppet theatre that is not the childish thing we may imagine today. It reminded me of the puppet theatres of A.S. Byatt's "The Children's Book"; in that story, the German puppeteers perform a version of Cinderella in which the stepsisters' feet drip blood and the original Grimm violence is fully present. These theatres have the same feel, and that eerie tradition comes into play throughout this entire book.

An excellent and serendipitous find at this time of year, I recommend this one to anybody interested in puppets, in folktales and legends, in strong female characters, in a Czech setting, in book design itself, or is simply looking for a well constructed gothic entertainment.
Posted by Melwyk at 9/04/2009 09:17:00 pm