Lively: Making It Up 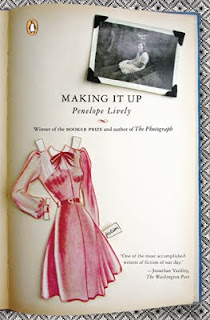 This book by Penelope Lively is different from the others I've read so far, in a couple of ways: first, it is a collection of eight stories rather than a novel, and secondly, it moves out into a wider range of settings and imaginative themes than the novels seem to. It has a freshness and a light touch which I admired greatly -- I think that it is one of my favourites of her work so far.

Lively takes her interest in the past and the vagaries of fate to great lengths in this book: each story has sprung from a moment in her actual life - that moment is told to us as preface to each story. But then she flings out her imagination, to create another person she might have been if things had happened differently, or to imagine a world without her in it, or even just what kinds of things might have occurred to someone else in her particular circumstances. It is a dazzling idea, and the stories are successful glimpses into other lives, fascinating and all very different. Lively has said in an interview that these are not biographical, not about her at all - the impetus behind them was her habit of wondering about the turns of chance, but they are all very much fiction. In the preface she states:

...the mythology that is intriguing today is that of imagined alternatives. Somehow, choice and contingency have landed you where you are, as the person that you are, and the whole process seems so precarious that you look back at those climactic moments when things might have gone entirely differently, when life might have spun off in some other direction, and wonder at this apparently arbitrary outcome... This book is fiction. If anything, it is an anti-memoir. My own life serves as the prompt; I have homed in upon the rocks, the rapids, the whirlpools, and written the alternative stories. It is a form of confabulation.

I particularly enjoyed "Comet", a tale about a woman in London whose half sister Penelope died in a plane crash years before, but whose remains have just been discovered, bringing up all kinds of memories and undercurrents in present day Sarah's life. It is a touching story, and somehow gallant, imagining the world going on without one's possible self in it. And of course Lively has to create a version of the myth of Odysseus and Penelope: in her memoirs which I've recently read, she makes mention of how she enjoyed reading the Odyssey as a child because she was right in the middle of it, as the long-suffering wife Penelope. She retells that bit in the lead up to this story, and then provides a very amusing take on the aftereffects of Odysseus' carousing and return home, and Penelope's reactions, in a modern setting of artists' colonies and London parties. Some of the other settings are shipboard off the coast of Africa during WWII, an archeological dig in the 70's England, at war in Korea, or even Number Twelve Sheep Street, a marvellous old house inhabited by a crochety spinster, the last of her line. Here is how we are introduced to the house:

A house that contains books has concealed power. Many homes are bookless, or virtually so, as any house hunter discovers. And then suddenly there is a place that is loaded -- shelf upon shelf of the things -- and the mysterious charge is felt. This house has ballast; never mind the content, it is the weight that counts -- all that solid, silent reference to other matters, to wider concerns, to a world beyond these walls. There is a presence here -- confident, impregnable.

It continues in that vein, with a larcenous nephew, an old bookseller, and a vaguely scatterbrained housewife researching a book all making appearances. What an enjoyable story!

I found myself copying out many passages from these stories, and will search out some of her earlier collections as well. It was nice to view her writing from a different angle, and to watch her working out her fascinations with the themes of memory and recollection and happenstance in another form. I highly recommend this collection.
Posted by Melwyk at 9/08/2009 09:25:00 pm