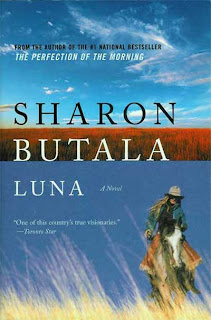 Luna / Sharon Butala
Toronto: Harpercollins Canada, c1999.
246 p.
This novel is set in rural south Saskatchewan, the setting for most of Butala's novels. I am not sure what to say about it; I read it all with great interest, but can't say that I either agreed with all of the philosophizing or really enjoyed the novel in the end. Upon doing a bit of research, I discovered that this novel is the second in a loosely connected trilogy about rural life in this area of the country. (The 1st is The Gates of the Sun, told from a male perspective, and the 3rd is The Fourth Archangel) I also read on her website that this book is "a modern version of the Greek women's mysteries". This statement actually made sense to me, and clarified some of the impressions I had received from reading; at times it feels like a chorus is speaking, and in the character of octogenarian Rhea, Butala has a high priestess ready to be used. The primary female characters all have names from Greek myth as well.

The book tells us the stories of a few women from a small community, mostly ranchers and farmers' wives. Primarily focused on Selena, it moves out and back to her story, encompassing the stories of her great aunt Rhea, her sister Diane (who suddenly changes into Diana halfway through), her daughter Phoebe, various women in their church and Women's Group, and of course, reflects on all the men in their lives. I enjoyed the descriptions of the women's meetings, all the petty squabbling and gossip about who is doing what; I liked how Butala elucidates how important the women are in maintaining community celebrations and suppers, and the casual, family feeling of all these events; and how their lives are constrained by expectations and set roles, some of which are fiercely supported by the women themselves. When Diane begins to show signs of depression and restlessness, she is judged to be lazy, unwilling to help her husband on the farm or take on duties in the women's community events. She ends up leaving town to move to Saskatoon where things happen, where she can take college classes and get a job. Her husband goes with her, but eventually returns to the farm with his two young daughters; Diana elects to stay in the city. She is harshly judged, even by her own family, as a terrible mother and a selfish woman. Phoebe is date-raped, but her father doesn't believe her, and the perpetrator leaves town and nobody seems to be too worried about it.

The element of the book I couldn't quite embrace was speechifying from what felt to me like feminist consciousness raising circles. The feminist examination of women's role in this society worked when it was woven into the story and was part of the tale, but there were a few set pieces which felt like a lecture had suddenly been dropped into the manuscript. For example, when the house is full of women, Phoebe hugely pregnant and Diane back from the city with her girls, Rhea visits and takes the opportunity to tell the little girls a bedtime story. This turns out to be a quasi-religious tale of women as priestesses and bringers of life, of being dispossessed in history by fearful and jealous men -- a very mythical and sweeping vision. All the women linger in the hall listening to Rhea, being astonished and moved by her story. It just was not believable, that two little girls would sit quietly in bed and listen to this, or that everyone would get misty eyed over it. I self-identify as a feminist but I still found this bit didn't work as a fictional device. Butala says in an interview that she is part of the first wave of feminism, the era of Betty Friedan, and the overt feminist sections of this book show that influence strongly.

What I found admirable about this novel was the way in which Butala gives us the very different lives and perspectives of the many female characters, and does so in a way that does not judge or condemn them for their choices. Whether it is Selena's choice to place her identity in her roles as a mother and a rancher's wife, or Diane's dissatisfaction and need for a wider world, or Phoebe decision to not go to university but have her unwanted child, each is presented as a individual choice not lesser or greater than another. They have disagreements and judge one another, but the author is not telling us that one way is better than another.

The land itself is a major character as well. Butala's nonfiction is about the vital importance of protecting the land, and about the spirit of the West, and that focus is also in evidence here. In one scene, Selena, her husband, and their two sons are driving the cattle in for the winter. They've left it as late as possible to save feed costs, and so it is snowing and 30 below. The descriptions of the cold, the storm, the procedure of one person driving a 'bait' truck loaded with feed while the other ride horses and direct the herd, all is precise and provides a picture of the hardships of ranch life which the reader can experience with all the senses.

The cold she felt had reached the point where it was merely pain, and it combined with a growing sense of urgency. It was nothing so trivial as a mere desire to run to the truck, get in and get warm. It was some underlying, barely controllable edge of emotion that she didn't dare examine, which she had to keep forcing back so as not to let it take over. She knew what it was: it was a life instinct, they all had it. ...... Peering through the frosted windshield, trying to find the trail, checking around for the right direction, worrying, she couldn't help but think it would be nice to live a life where they didn't have to do things like this. Like in the city, she thought, people just catch the bus to work every day, stay inside warm buildings all the time, never really feel the cold, never really have to be afraid of the weather. People in the city have never known what's it's like to have that thrill of fear that if you get careless, let your guard down, or have some bad luck like getting caught in an unexpected blizzard, you might actually die, right then and there.

It was certainly an intellectually interesting read, and I did like the everyday details of small town life. But I felt like I couldn't quite place this one in time, and I didn't feel that anything was really concluded by the end. Perhaps I'll have to read the other two in this loose trilogy to see the whole picture.
Posted by Melwyk at 8/30/2009 10:18:00 am