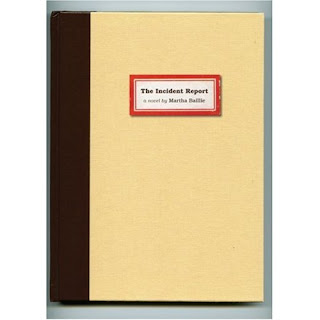 This new novel by Martha Baillie (employed in the Toronto Public Library system over the last 20 years), tells us a story in the form of incident reports from a character who works in the Toronto Public Library system. Miriam Gordon is a restrained yet fragile kind of woman, very wary about making connections with others. The story progresses through incident reports filled in at work, required when a member of the public does anything unusual or threatening. It adds in sketches of her coworkers which amused me greatly. It continues to keep our interest by also interspersing incident reports from Miriam's own life; she meets a young man, Janko, a Slovenian artist now living in Toronto, and they begin a relationship. But Miriam begins finding ominous notes at the library, beginning with a seemingly innocuous page of sheet music from Rigoletto, an opera about a hunchbacked jester who tries to defend his daughter's honour against a lecherous Duke, only to have it go oh, so wrong. Someone out there seems to see himself in the hunchback's position in relation to Miriam and the creeping menace, along with Miriam's chillingly calm refusal to take it seriously, causes a frisson of foreshadowing which comes to a rather shocking and disturbing conclusion.

It is an intelligent story, full of literary and musical references, to Rigoletto and also to Satie. The Grimm Brothers and their not-so-nice tales make an appearance, A.A. Milne is referenced, and an epigram by Ray Bradbury, ironic in this context, opens the book: Without the library, you have no civilization.

But the parts I recognized most were the tales of the patrons and Miriam's long suffering and matter-of-fact recounting of such interactions in the language of the incident report. Karen Luscombe at the Globe and Mail reviewed this book quite glowingly a few days ago, speaking of it in terms of Satie's piano piece Vexations (840 repetitions of one theme) and as an 'unsettling dreamscape', a description I find quite apt. However, she also states that:

Miriam's Rigoletto mystery only heightens Baillie's absurdly normalized mania: The library serves as a kind of outpatient ward for a rather creaturely cast of literate “nutters” – some deeply sympathetic, others not so much. One patron directs traffic with a teabag; another, who threatens to “cut off” Miriam's arm, harbours “a large knife and a can of bear repellent” in his bag. ... Baillie is a subtle portraitist and creates an engaging heroine with rich psychological nuance. Somehow, despite Miriam's automaton-like impassivity, her evolution matters to us. When she happens upon a “sticky mess” left by one of the library's “determined masturbators,” Miriam's absurd über-restraint simply compels: “The books, soiled by what looked like common semen, we bagged in clear plastic and I withdrew them from the collection. No other actions were taken.” The effect simply harrows.

As an employee of public libraries over the past 15 years or so, I missed the "absurdly normalized" part. And the "absurd uber-restraint". It all seemed so very normal and everyday to me. But it did make me think: did Baillie intend all the incidents to seem surreal and unsettling to the layreader as part of the psychological development of Miriam's character? And does the fact that I overlooked the absurdity and surreal nature of these incidents say more about me than Miriam?? ;)

Nevertheless, the actual danger and fear that Miriam experiences at one point did make me shiver, and see how her public facade was part of her intrinsic defense against an uncertain world. The conclusion makes complete sense in that light. I do think that more than an attempt at heightening surreality, or creating a world of unreal, nightmarish effect, the incident reports show "the subtle dynamics of a socially exposed workplace", as the book description at McNally Robinson would have it. Baillie herself stated in an interview with the Toronto Star that about 90% of the incidents came from either her own or her coworkers' experiences.

For me this was one of those books that I couldn't look away from; the occurrences Miriam notes were cringingly all too possible, but in counterpoint we have her delicately told moments of private life. Her unfolding love story challenges the dysfunctional social interactions she suffers each day, but to what extent? How much can she count on it, or expect it to remain within her grasp? The literary references sprinkled throughout should give you some clue to the tone of the book, and if anyone has read it I would love to exchange ideas about the conclusion. I am still mulling it over and am not sure what to think of it; is it as it seems or is there something more there to uncover? A fascinating and original book which I am glad to have come across.
Posted by Melwyk at 7/15/2009 10:45:00 pm