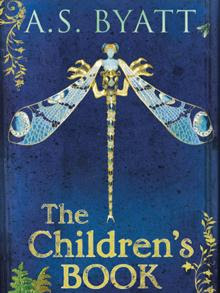 I've taken a long time to try to review this book because there is just so much in it that I had to digest first. It's a huge, sprawling saga taking us through the Edwardian Age up into the First World War and its end. I have a particular fondness for the Edwardians and so was very intrigued by the first intimations of the theme of this novel.

Olive Wellwood is a successful writer of children's fairy stories; she supports her large family (impecunious, philandering husband Humphrey; spinster sister; eight children) with her writing and lives in the world of her fiction. She also writes individual, private stories for each of her children, kept in specially bound books. We really only get to read from (oldest son) Tom's and (oldest daughter) Dorothy's stories though. It's no surprise that these two are the most fully developed characters out of all the Wellwood children. But the novel does not limit itself to just the Wellwood family. We open with Tom (probably the most frequently appearing of the younger generation), at the South Kensington Museum. The curator, Prosper Cain, former military man, is a fascinating character and provides an inside glimpse into the way the Establishment dealt with the upsurge in arts & crafts at this time. As the story opens, Tom and the curator's son Julian discover a poverty stricken boy living in the vaults under the museum. Philip, the runaway, is a budding artist and is taken along to the Wellwood's Midsummer party with the rest of the characters, where he is apprenticed to local potter Benedict Fludd. At this huge traditional party we meet most of the characters who will make up the dramatis personae of the book -- and I think a list of all the characters and their relationships at the beginning of the book would have come in very useful as something to flick back to while reading. At times I had to stop and retrace my steps to figure out which of the young people Byatt was now talking about! We meet and consequently follow the fortunes of Basil Wellwood, Humphrey's brother, and his German wife and children. We meet all the Fludds and a few of the other locals. There is also a family of German puppeteers who perform a dark, Grimm version of Cinderella that is described with such visual acuity that I felt as if I was watching it myself. (And it made me want to go watch some puppet shows -- when I was in Kyiv there was a children's puppet theatre that performed elaborate shows which seemed to be in this same tradition but unfortunately all in Russian so no luck for me.) The number of characters who are German allow for some travel into prewar Germany and a view from both sides of the cultural and political divide, revealing many similarities but also some vital divergences. The plethora of characters is both a blessing and a curse; they allow for a very wide look at aspects of this era, in all the professions and social classes which they cover, but with there being so very many of the same ages in the same circles, it also led to confusion at times. For example, as I was getting really interested in one character's story, it would break off and not return to the same character for fifty pages. It also meant we only delved into the depths of a few characters, leaving others with more briefly sketched motivations for their actions.


Still, this is a novel of ideas as much as characters, and there are hundreds of themes to follow through the book. The main focus is the idealism of this Edwardian, Art Nouveau "counterculture" in which we find ourselves, beginning with the Wellwoods. The characters are writers, potters, weavers, jewellery designers, curators, puppeteers, impresarios, actors and so on, with Basil Wellwood, a banker, the odd man out. We see the influence of William Morris, of various colleges which educated the younger people in folklore and folk arts (author Hope Mirrlees is mentioned as a former pupil of a particular professor) and of figures like H.G. Wells. There is one particularly unsavory man with an insatiable need to seduce every woman who walks by, and to me he was a shadowy reflection of Wells. But we also see that in the younger generation there are rebels like Geraint Fludd, who wants to become a banker alongside Basil, and Dorothy, who stubbornly pushes against the gender restrictions of her era and becomes a doctor. We attend huge events like the 1900 Exposition Universelle (World Expo) held in Paris (gorgeous descriptions), the opening of the Museum which became the Victoria & Albert; get to see the social conditions in Germany which led to war, have to suffer through following the young men we've met as they experience World War I; and see how all of these individual lives are affected by the social movements they must move within. At times, especially near the end, it begins to read like an almanac: lists of dates and who did what when, both the fictional characters of the book and the real life historical figures all around them. That was a bit dreary. However, in another review, I saw someone mention that the novel starts in a dreamy, slower style reflecting the enchantment of childhood, and as this generation grows older and starts to lose its innocence, the pace of the storytelling speeds up and becomes more fragmented as well. This was a great point; and I think it is supported by the final few pages in which those people who find themselves back in London after the war gather together and have a supper which is described in such a way that it feels like a painting, a moment frozen in time, something perhaps more cinematic and modern, with the Edwardian veils finally torn away from reality. There is a dark dissonance to the juxtaposition of beauty and danger in much of Art Nouveau, an eroticism that doesn't always play out well for the cast of characters here. After the depths the world sunk into during the war there is a feeling of cautious optimism at the conclusion that some of those dissonances might be resolved.

I can't really do it justice in a short review; there is too much in its 617 pages to summarize. If you have the patience to wade through quite a lot of social history and have an interest in Art Nouveau and textile arts, I think it is worth reading. If you're a Byatt fan you will also like it; there's no violent alteration in her style or subject matter to object to here.

The jacket designer did a fantastic job as well; the cover is gorgeous and comes straight out of the novel. It is definitely designed after Tom's book, a dark blue scrapbook with ferns pasted on; and the mysterious dragonfly image is a René Lalique brooch design that is described at length in the book, which Tom sees at the Paris World Expo. (It was created for Sarah Bernhardt). This is a novel full of the magic and mystery of the decorative arts, of writing and storytelling, of the struggles of family relationships and the finally unknowable secrets within each person. The more I reflect on it, the more I realize how multilayered the text was, and think that I will have to reread it someday.


Kate S. said...
I eagerly await your review of The Children's Book. That one is close to the top of my TBR list, but it seems like a book that requires commitment, so I'm holding off on it until I get caught up with my overdue reviews!
Louise said...
I would love to know more about AS Byatt.

Yes, this one did take commitment! I was able to read most of it while I had a few days off work, otherwise it would have taken much longer, I am sure. It did have bits that ran a bit slower but overall it drew me right through with the complicated interwoven characters' lives.

Eva said...
Very jealous you've already read the new Byatt! :) How does it compare to her other short story collection?
Kailana said... The Children's Book: Do you recommend this to someone that isn't a big short story reader? What was your favourite story and why?


This one sounds like it could be short stories, as the blurb talks about the idea of main character Olive Wellwood creating a fairy story for each of her children. But, it is all tied in to make one behemoth of a 600+ page family saga! Actually, I would have liked to read each of the children's stories but the only ones we really get to know are eldest son Tom's and daughter Dorothy's.


Maree said...
I'm interested in The Children's Book, too. I've never read A S Byatt, though; is it a good place to start?

It's a really long starting place; I'd probably try one of her short story collections like The Little Black Book of Stories first to see if you like her style. Or Possession, which I still preferred to this book, even though I did find this one absorbing.

gnoegnoe said...
I'm curious about the A.S. Byatt book. Is it anything like Possession or something completely different (and how so)? I guess it's about books again?

It's similar to Possession in that it is about art (pottery, jewellery, design, and writing in this one) but it doesn't go back and forth between time periods. It begins in the Edwardian Era with the Wellwood family and all their outlying acquaintances, and follows Olive and Humphrey Wellwood, their eight children, Olive's maiden sister, potter neighbours the Fludds, curator of the Victoria & Albert Museum Prosper Cain and his children, Humphrey's brother and his half German progeny, itinerant German puppeteers and so on and so on. Possession had fewer characters to keep track of, and more of a dashing, romantic feel. This is a sweeping historical epic fully immersed in the "counterculture" of the Edwardian Era, leading up to the horrors of World War I and the destruction of that innocence that the Edwardians cultivated.


thedarkinthedark said...
In The Children's Book, Olive writes Fairy Tales. Is there any connection between her and Fairies or is it told completely real?

It's completely real. The fairy tales are deeply versed in Grimm, Freud, Bettleheim, etc. -- representative of psychological depths to human existence. Olive also uses her stories as a way in which to control or manipulate her children and the way in which she chooses to perceive them. She really is an extremely self centered creation. The whole idea of fairy tales and a fairyland apart from normal human existence echoes the theme of the novel; the artistic milieu in which all these characters orbit feels like a dream world which is rudely shattered by the unavoidable disaster of the War.


A few other Readers speak:

Kerry at Pickle Me This

Shan at Half Soled Boots gives it a rethink

Isabella at Magnificent Octopus reviews it, and posts about seeing Byatt at Blue Metropolis
Posted by Melwyk at 6/18/2009 08:41:00 pm