To My Tortoise Ananke

Say it were true that thou outliv'st us all,
O footstool once of Venus; come, renew
Thy tale of old Greek isles where thy youth grew
In myrtle shadow, near her temple wall;
Or tell me how the eagle let thee fall
Upon the Greek bard's head from heaven's blue,
And Apathy killed Song. And it is true
that thy domed shell would bear a huge stone ball?
O Tortoise, Tortoise, there are weights, alack!
Heavier than stone, and viewless as the air,
Which none have ever tried upon thy back;
Which, ever and anon, we men must bear --
Weights which would make thy solid cover crack
And how we bear them, let those ask who care.
Eugene Lee-Hamilton (1845-1907) 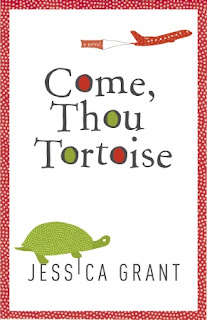 Come Thou Tortoise / Jessica Grant
Toronto: Knopf Canada, c2009.
412 p.
I recently read this charming book, one of Random House's New Faces of Fiction. I was a bit leery about it at first, as it seemed to be consciously 'quirky' and eccentric. But I was quickly disabused of my preconceptions; the narrator, Audrey Flowers, is a sweet girl and hilarious storyteller who is dealing with one of those weights which Lee-Hamilton mentions above, a weight which has never been tested on a tortoise's back. The book opens with the news that her father is in a coma, and Audrey is flying home to St. John's, Newfoundland from Portland, Oregon to be with him and her Uncle Thoby, in the process leaving her pet tortoise Winnifred to be cared for by friends. En route, in the second chapter, she disarms an air marshall named Marshall -- it is becoming clear why Audrey is known as Oddly by her family.

And then my favourite, in reference to two swans swimming in lonely splendour on an apparently bottomless pond behind Audrey's St. John's home:

When the swans put their heads underwater, they look like baby icebergs. When they lift their heads, they look surprised. Did you see the bottom. No. Did you. No. Let's check again.

When Audrey returns home she finds that her father has already died, and her grief intrudes on the light tone of the narration. The emotion is very real but not at all sentimental. Her Uncle Thoby's grief is also all-consuming, and it leads to the action of the rest of the story: he flees back to England, from whence he came when Audrey was seven years old. Audrey must first cope with his absence and then follow him to England to figure out the mystery of her life and upbringing. The elements of the story which are necessary to the 'mystery' are pretty clear to the reader, but it is handled so much from Audrey's point of view that you are still waiting for her to figure everything out. It is clear that she is much loved, both by her father and Uncle Thoby as well as their neighbours and friends (ie: Clint the Taxi Driver, neighbour Byrne Doyle, her father's secretary Verlaine). Her developing romance with a Christmas tree light technician is perfect as well.

It's a touching story, both moving and very funny. Grant's use of language is clever and Audrey is a truly original narrator. Winnifred's existence as a kind of reality check, a tortoise who has seen everything and will be straight with us about it, is a good foil to the very personal perceptions that Audrey shares with us. I found this book a fresh, intellectually invigorating experience but I also just fell in love with nearly every character. I recommend it.

Oh, and I nearly forgot to mention, I found the perfect new word to add to my vocabulary -- in reference to her father, Audrey comments that he has his "grognard face" on. What's that?
"A grognard is someone who has just woken up and is not yet happy about it."
Now if that isn't the perfect word for me I don't know what is! ;)