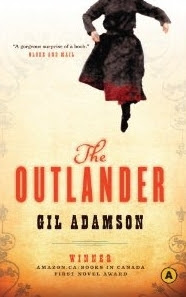 
The plot of this one is pretty well known by now, at least in Canada -- from the publisher:

In 1903 a mysterious, desperate young woman flees alone across the west, one quick step ahead of the law. She has just become a widow by her own hand. Gil Adamson's extraordinary novel opens in heart-pounding mid-flight and propels the reader through a gripping road trip with a twist -- the steely outlaw in this story is a grief-struck nineteen-year-old woman.

Mary Boulton, the aforementioned widow, was an interesting character; she has a relentless drive to make it through the wilderness after fleeing from the murder of her husband. She seems to have very good luck in running across men (always men) who help her in this process. Her story begins powerfully, in the dark with Mary in full flight, pursued by dogs and her malignant ex-brothers-in-law. The writing is exquisitely descriptive and the scene draws you into the book before you even realize you've turned so many pages. The sense of pursuit remains throughout the book, adding tension to even the most mundane scenes.

While I enjoyed the story overall, the problem I had with Mary was that I never felt that I understood her. We learn of her childhood, of how she came to marry and leave her civilized upbringing, of what exactly happened to drive her to murder and flight. However, there is never a clear why to any of it, and I could not get a sense of Mary's motivations. She seems to suffer from postpartum depression, or is it just the voices she's heard all her life? Not really sure. I am also not really sure if I bought the brothers' actions near the end of the book; they are drawn so clearly as vengeful harbingers of justice that I expected them to do away with Mary when they found her, but their meeting is strangely anticlimactic.

Still, I found the writing, especially the descriptive passages, generally strong. I enjoyed the writing style probably as much or more than the plot -- the story moved along and carried me with it, but on reflection I did find I had some problems with the plotline. One part of the book I found most satisfying was Mary's eventual existence in the real town of Frank, Alberta. Adamson describes it as a mining camp of rough and ready workers, where Mary stands out as the "beloved sister" of local preacher and the only trustworthy man, Angus Lorne Bonnycastle. Mary started to come together as a character once she stopped moving, although unfortunately it was only a brief hiatus for her. Her time in Frank ends when the real life tragedy known as the Frank Slide occurs. In the early morning hours of April 29, 1903, the top of Turtle Mountain collapsed, causing an extensive landslide that wiped out a swathe of the town of Frank, killing an estimated 70 people. However, the reality of this occurrence also tells us that the "bustling town of Frank was home to approximately 600 people in 1903" and that many of the survivors were children. Frank was a town with proper homes, families, and a railway line as well as just coal mines, so I am not certain that Mary would have stood out as such an anomaly as a woman. Still, it does make for very dramatic storytelling, and when she returns to the town at the end of the book it is suitably ambiguous. Just as in the beginning we are not quite sure what or why Mary is doing what she does. It was a thought-provoking story, but you can likely tell that my reactions to it are rather ambiguous as well. I appreciated the skill and talent Adamson brings to the book, but I am not sure that the story fully engaged my imagination or sympathies. Read a few other reviews for a less muddled take on this one!

Random Jottings of a Book and Opera Lover