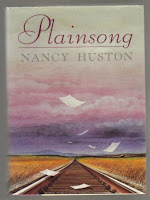 Plainsong / Nancy Huston
Toronto: HarperCollins, c1993.
226 p.
This was the second novel by Canadian born, Paris based Nancy Huston. It is set in Alberta, where Huston was born, and follows the history of Alberta from settlement through World Wars, the Depression and forward. It runs through four generations of the Sterling family, told by narrator Paula, as a reimagining of her grandfather Paddon's life. Entitled Plainsong, it hints at medieval plainsong (mentioned in the text), a form of song which has one simple line, with no flourishes or harmonies. It echoes Paddon's isolation, as well as the religious themes threaded throughout the novel. Plainsong also gives me the sense that Huston is telling as an epic the story of a man who lives a stifled, frustrated life, as in Homer's opening lines of the Odyssey:
"Sing to me of the man, Muse, the man of twists and turns driven time and again off course"

Told in the unusual 2nd person narrative style, the book is addressed to Paddon. While the attempt at 2nd person often fails, here I found it successful. The idea that an individual is essentially unknown plays out in this telling; Paula was Paddon's favourite grandchild, and now that he has died, she is trying to figure out the reality of this man whom not many people loved as wholly as she did. She is trying to recreate his life story, and the technique of addressing it to Paddon gives us the feeling that she is waiting for him to reply, to tell her that she's on the right track. The writing style is flowing, elements like long sentences with few commas contributing to a rhythm that feels like a train in motion. (one reason why I feel this cover is perfect for the book.) Paula's imagination leads her on and on until near the end of the book she breaks in as herself once or twice, asking whether she's got it right. That element highlights the creative act necessary in understanding another individual, in life or in fiction. Another interesting stylistic choice in the novel is that it opens with Paddon's death, and although Paula then moves through his life non-chronologically, the story leads us to the moment of his birth, and even earlier, to the moment of his conception. It draws attention to a person's character and life being shaped by more than the individual personality, rather placing them into a familial and geographical context.

But apart from all my appreciation for the structure of the novel, it also tells an absorbing story of generations of a family, the problems handed down one to another. These include adultery, physical abuse, emotional coldness, and the inability to achieve worldly success. Even so, there are moments of happiness and peace in life. Paddon had gone to university and found it immensely fulfilling; he intended to write a comprehensive dissertation on the concept of Time. But life intervened; he married and had children and began farming. His frustrated ambitions and search for meaning to life combine to make him deeply agnostic, in opposition to his Lutheran wife and Catholic missionary sister. The religious schism as well as his tendency toward violence harm his relationships with his wife and with his children, and he only finds the ability to relate peaceably to family once he has grandchildren. One part of the storyline has him having a long term affair with a Native artist. This allows for his softer side to be shown, as well as to tie Native history into the Albertan history of his own family. It was fascinating but perhaps not 100% likely. Still, the self-destructive nature of Paddon's life, covering so much time and so many historical events (the Depression, the first ever Calgary Stampede, etc.) makes for compelling reading. I felt like the prose carried me forward, trying to pick out the trajectory of a circumscribed life. Here is Paula near the beginning, recalling a part of her relationship with her grandfather:

When I was about six you lifted me next to you on the piano bench and told me about Scarlatti's cat. One day, you explained, Scarlatti's cat marched delicately across the keyboard, setting its paws down precisely and at random, every five semitones or so, and the composer made a fugue of the melody thus produced. That, you told me, is love.

Listen -- one note after the other, going up. Slow strange solitary notes. A lot of flats. A lot of black notes. One, one, one, one, one, one -- going up. Listen -- in an inimitably minor key. You walked across the keyboard of the century, Paddon, trying to watch where you were going, and you failed. Listen to the notes. Black and white notes played out virtually at random. But a lot of flats. A lot of accidentals. You kept on waiting for Scarlatti to intervene, didn't you? You couldn't believe there was no Scarlatti, there never would be any Scarlatti. You would rather have smashed the piano to smithereens than accept the idea that no Scarlatti would come, ever, to build a fugue around your mournful melody.

This excerpt gives the sense of the man Paddon was, how people saw him. I admired how Huston was able to take the life of such a man and make it so sympathetic and so interesting. The writing itself was a big attraction as well; it is accomplished and poetic. This book won the 1993 Governor General's award for Fiction in French once Huston had translated it herself (a bit controversial at the time as it was first written in English). Huston habitually translates her own works, however, whether she writes them first in French or English. This was a fascinating read and I will be looking for more of Huston.
Posted by Melwyk at 2/07/2009 02:56:00 pm