The Secret Life of Sparrow Delaney / Suzanne Harper
Sparrow is the seventh daughter of a seventh daughter, who lives in Lily Dale, New York, with her large family of women. She has no desire to be the kind of weirdo who talks to dead people, so hides her gift from her family of spiritualists. Then the ghost of a teenage boy asks for her help...
This first novel melds spiritualism, romance, humour and a touch of history to create an intriguing novel about being true to yourself. Enjoyable characters, including Sparrow herself and her irascible Grandma Bee, make this book sparkle (and not in an Edward-the-Undead way). The real life spiritualist town of Lily Dale is the perfect setting for this story.

I love retellings of fairy tales, and Beauty and the Beast is one of my favourite tales to begin with. While Robin McKinley's classic Beauty is one of my top ten all time books, this retelling took a different approach. The main character, Kyle Kingsbury, is one of the rich popular kids at his private school. He has a very strained relationship with his father, an image obsessed tv anchor. His girlfriend is one of the popular kids as well, and on prom night he gets her a rose rather than the orchid she asked for. She pitches a fit and so Kyle ends up giving the rose to the girl taking tickets at the door. This one act of kindness ends up saving him, as a witch turns him into a beast but gives him an out because of the rose; if he can find someone to love and who loves him in return he will be restored. The rest of the story is great; Kyle's father banishes him to a brownstone in Brooklyn where nobody will see him, where he has a housekeeper and a blind tutor (both marvellous characters). He finds a girl to come and live with them, yes, you guessed it, the ticket taker from the prom. How they fall in love is believable within the story, and while there may be just a couple of moments where the action comes too close to the Disney movie, I liked this reworking a lot. It was humorous and sweet. The chat room for monsters that Kyle joins at the beginning of the novel, which reappears intermittently, is original and amusing; the frog from The Frog Prince has trouble typing with webbed feet, the Little Mermaid needs help deciding whether to pursue her prince, etc. 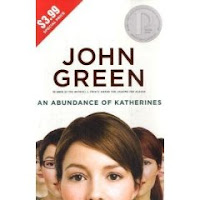 An Abundance of Katherines / John Green
What can I say? This totally lives up to its hype. That doesn't happen often.
Child prodigy Colin Singleton, having just graduated high school and been dumped by his 19th Katherine, is completely directionless. His best friend Hassan convinces him they should go on a road trip, so off they go, ending up in Gutshot, Tennessee. What happens in Gutshot ends up giving them both new focus and new understanding of their lives. But while it is all happening it is very, very funny. When I read a book that causes uncontrollable laughter, the kind where you can't speak when you try to explain to your husband why you are laughing so hard that you are crying, so he just has to take it on trust that it's hilarious, well, then I know it's a great book. This happened more than once with this story. Read it! That's all I have to say.
Also reviewed by: Bookfool at Bookfoolery & Babble, Jessica at Bluestocking Society
Posted by Melwyk at 12/23/2008 08:46:00 am

Email ThisBlogThis!Share to TwitterShare to FacebookShare to Pinterest
Labels: book review, YA