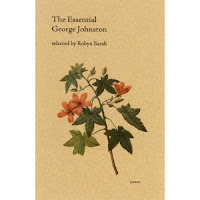 
This is the first volume of a new series by Porcupine's Quill, called "Essential Poets" in which, they say, an attempt will be made "to offer the best possible introduction to preeminent figures in Canadian poetry."
This one has been edited by Robyn Sarah (one of whose poems I've shared this month) and includes a wonderful preface in which she discusses his art, and suggests that his poems are most appreciated when read aloud. I'm interested in this volume both because Johnston is one of those 'Preeminent Figures' and because of his tie to Stratford. Both sets of his grandparents lived in Stratford, and this book tells us
"many family members were employed in the Grand Trunk shops. His maternal grandfather, a locomotive engineer, is said to have entertained himself on the job by reciting Milton over the roar of the engine."
Isn't that an amazing image? It made me smile. George Johnston was very well known for his teaching and translating -- notably of the Icelandic sagas and of Faroese poetry. He was also a marvellous poet in his own right. Here is an example of his original phrasing:

Airs through windows yet
and through the downstairs let
that over pastures come
thunder from.


And another, a little more traditional:

Peace, all but quite,
Jeanne talking to her cat
whose eyes are shut,
tail tip stopped, all but.

Pretend sleep
on an uncertain lap
with the familiar voice
quoting cat sense.

Age, that in its clutch
bears the spinal itch,
makes hind-quarters weak
and stomach sick,

also rounds the purr
rounder than ever before,
and brings pretend peace,
peaceful almost as peace.

Email ThisBlogThis!Share to TwitterShare to FacebookShare to Pinterest
Labels: Poetry