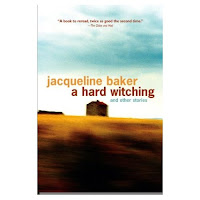 With everyone from John at Book Mine Set, to the Literary Kitten, to A Curious Singularity posting about short stories I thought I would celebrate short story collections for an entire week. I've been reading so many wonderful collections lately! I'll start off with one I've just finished reading for the Canadian Book Challenge, Jacqueline Baker's A Hard Witching. This is a book I'd heard of when it was published in 2003, as it won the Danuta Gleed Literary Award, the City of Edmonton Book Prize and the Howard O’Hagan Award for Short Fiction. It took me this long to read it, though! I'm glad I did; I'm from Saskatchewan originally and am always interested in books about Sask. This one is set in the Sand Hills region, an area down at the south end of the province, crossing over into Alberta. There is quite a geological range in Sask; I'm from more up north, where it is very treed and there are lakes everywhere you turn. In all the time I lived there, I never went down to the Sand Hills. So while this book made me homesick, it also made me realize how much I didn't know about my home province.

As for the book itself, it consists of 8 stories all set in the region. They deal primarily with rural lives, and are concerned with family history, secrets and relationships. Baker has a Germanic family background, and many of these stories take the lives of German immigrant farmers as a starting point. I enjoyed them especially for their evocation of place. In the first story "Cherry", the young narrator and her brother are staying with their grandparents and are put to work:

I realized that a significant portion of the time we spent at our grandparents' was devoted to picking things: tomatoes and rhubarb and lettuce from the garden (the carrots, radishes and beets were all off-limits, as Max broke the stems, leaving the vegetables to rot in the earth); saskatoons and chokecherries out at the Sand Hills for jelly; mint and chamomile from the patch in back for the detested tea, which, along with raw garlic and nutmeg, was used to treat all the minor ailments that we didn't have the good sense to hide.

I think I enjoyed this description because it was so familiar to me! I found the title story especially interesting. Edna Crosie, recent widow, is a having a run of misfortune; her husband has died, and her well has just run dry. The cost of drilling a new well is so enormous that when a man comes to inspect her old one and offers to witch for water, she agrees, although normally she doesn't hold with that kind of thing. She is a wonderful character, very practical yet suspicious, and thinks of her husband constantly. She refers to him as "Mr. Crosie", a touch I loved. She is reminiscing about him here:

That was one thing about Mr. Crosie, he never was a drinker. And she was thankful for it every day of their married life. No, he was never a drinker and he never kept things from her. He'd always said, "Edna, I couldn't keep a thing from you if I tried." Edna always felt a certain satisfaction listening to other women complain about their husbands in that way. She would just sit back and listen and at the right moment say, "Mine, I can read him like an open book." And she could, too. Problem was, Mr. Crosie was never all that interesting; it was like reading the same page over and over.

Jacqueline Baker has a voice that is very like Saskatchewan; calm and definite, with much attention paid to the natural world. There is also humour, but it shows in amusement in the telling rather than a laugh-out-loud slapstick variety. I read this book straight through, and admired her ability to construct stories that feel as spacious as the landscape. Most of the stories are told from the viewpoint of a young woman, and yet they are distinct and memorable. I recommend this collection and will be looking for her recent first novel, The Horseman's Graves.
Posted by Melwyk at 10/28/2007 11:44:00 pm