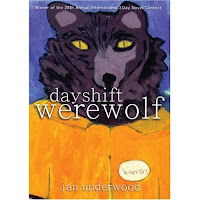 
This one, as I've mentioned before, was the 2006 winner of the 3 Day novel competition. I read it fairly quickly -- it is short, after all, having been written in three days. I really enjoyed the sly humour throughout these linked short stories, all about the dysfunctional monsters and fabulous inhabitants of Smiths Falls, Oregon. Because of its monster-ish content, I am counting it as part of the RIP Challenge. However, it is funnier than it is horrific, although the black humour (especially in the first story) did give me the shivers.


The collection starts out with a long story about zombies. In the voice of the mother zombie, it reveals what happens when the zombie group tries to invade Smiths Falls. Their plan is slightly derailed by the presence of Andy, a young zombie with ADD. He just can't seem to go along with the group and act sufficiently zombie-like. This story is very strong and could stand on its own; the plight of the zombie horde carries echoes of social conformity and wanting to break out as an individual. Plus, the narrative voice is so wry and wonderfully done.

The title story is second in the collection, and is equally strong. Warren is a low-performing werewolf who is demoted to the day shift, where it will be nearly impossible for him to meet his quota of human kills. He is depressed and goes to his hairdresser, who tells him that perhaps this is a good time to reevaluate his priorities. He comes to the realization that while he always thought he just had a small appetite, he never loses his taste for the zucchini and tomatoes in his large garden, it is just that he doesn't like manflesh (this made me laugh out loud, startling my half asleep husband). There is also a small rant about the bad grammar evident in the city's street signs - where do you put the apostrophe in Smith's Falls, after all? This ties in nicely to the other stories in the collection, as Warren ends up getting a job repainting all the street signs once the zombies have knocked them down in their nocturnal attack.


The following stories are shorter and not so fully developed, although they are still clever and certainly worth reading. They feature a sentimental demon, a Norwegian garden gnome seeking asylum, a Sasquatch who wishes to be a ballerina, the barnacle man, and a claustrophobic mummy. The final story is a brief fragment detailing a mummy waking up in a museum and thinking it is in a fabulous tomb. It is short but quite lyrical and moving; a wonderful way to close the book.

I thought this was a great read, and am amazed that it is a 3 day novel. The structure really works and her clever writing made it fun to read, providing a quiet amusement at her one liners and her wittily drawn dysfunctional monsters. Recommended.
Posted by Melwyk at 9/13/2007 10:49:00 am